PCAI is happy to announce new additions to its Collection. 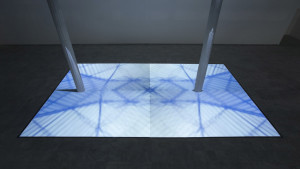 Danae Stratou’s ICESONGS2 (2012) comprises a video and sound work which emerged from the site specific installation ICESONGS created by Danae Stratou and presented at La Verriere, the exhibition space of the Fondation d’ Enterprise Hermes, in Brussels in 2010.The soundscape was generated from sounds emitted directly from the Antarctic Ocean’s shifting icebergs as they sail away, collide, brake and melt. They were captured by directional underwater microphones lying on the seabed of the Antarctic Ocean now used by researchers for monitoring Antarctica’s melting ice shelf. They used to be part of a massive US monitoring network whose aim was to track the paths of Soviet nuclear submarines as they crisscrossed the South Pacific. 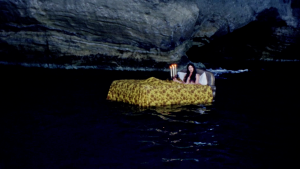 Ariana Papademetropoulos’ Voyage to Venus (2019) was shot on the Greek island of Milos. The first scene is of the artist asleep on a bed washed up on the shore, the white rocks offering a dramatic backdrop. The film showcases Ariana Papademetropoulos floating in a bed in the sea, a vision she had in her mind for long. Nature has triumphed and taken over, the floating bed wanders ungoverned at the mercy of the waves and the wind. Papademetropoulos often draws inspiration from the deep sea and the creatures that inhabit it, real or mythological including sea shells and fish. With a nymph like presence in this film, the artist resembles a Nereid, the sea nymph often associated with the Aegean Sea. These deities symbolise everything that is beautiful and kind about the sea and the importance of its preservation.

at the 59th Venice Biennale

AT PCAI’S VENUE IN DELPHI

Rituals of Cleansing in the Ludwig Museum